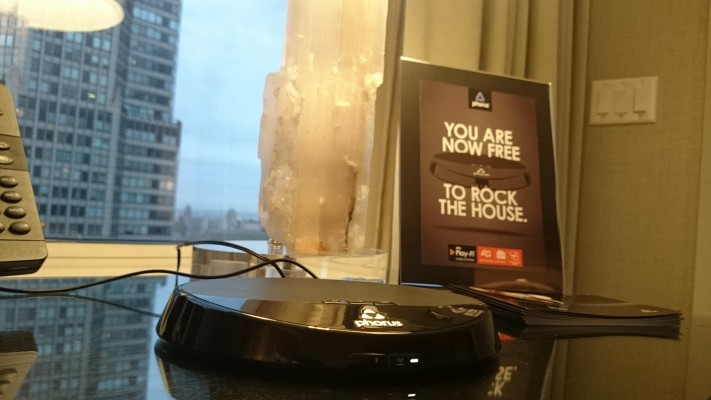 When you should use one or the other.

One of the biggest upgrades we've made to the new PR5 Receiver (just released!) and PS5 Speaker (coming soon!) is built-in support for Dual-Band Wi-Fi connectivity.   We're one of the first speaker companies to add this advanced feature, which will now be standard on all new DTS Play-Fi(R) products.   Of course, as Wi-Fi audio fanatics, we know this is a big deal, but what does it really mean?   Essentially, it means that if your device and your router have the same capability, your music can be streamed using your choice of two different wireless bands, 2.4 GigaHertz (GHz) and 5GHz, otherwise known as "Dual-Band".

In this post, we'll break down the practical differences between them to help you choose which is best for your Play-Fi experience.

This should give you the basic "at a glace" benefits of both, but we'll go into more detail as well.

Interference (what messes up your experience):

The 2.4GHz band encounters more interference than the 5GHz signal because of two things:

The main issue is that there are many wireless devices running on 2.4 GHz , such as cordless phones, Bluetooth, baby monitors, radio controlled toys, amateur radio, microwaves, etc., and lots and lots of existing wireless networks that might be near yours, such as your neighbors or people in your apartment complex. Far fewer devices and networks currently use 5GHz.

In addition, the 2.4GHz band has only 3 non-overlapping channels (channels 1, 6, & 11) for these various devices to operate on, compared to the 23 channels of the 5GHz band. Having more channels makes it easier to find a channel that is not used by anyone else in your area.

Range (how far your data travels):

Many external influences affect the range of a wireless network, making it impossible to predict what range you will achieve in your location. Certain materials in walls, tiles, and pipework can dramatically impact your effective streaming range.

Higher frequency (5GHz) radio waves lose more of their energy passing through walls, air etc. than lower frequency (2.4GHz) waves. Since the transmissions are being sent with essentially the same power from the source,  2.4GHz wireless networks will usually have a greater range than 5GHz networks.

Range for both bands can be greatly increased by the use of specialized "high-gain" directional antennas. Some high-end, top-of-the-line routers come with these already, and if you are interested in extending the range of your wireless network for all of your wi-fi activities, it could be worth looking into a router upgrade.

Speed (how quickly your data moves):

The major difference between 2.4GHz and 5GHz is the speed of data transmission, which you may have also heard described as "bandwidth". Higher radio frequencies allow faster data transmission, so 5GHz allows much faster network connections than 2.4GHz. If you want to use high-bandwidth applications, like streaming video, over your wireless network, 5GHz is by far the better choice. Play-Fi doesn't require a lot of bandwidth on its own, but if you are streaming to lots of speakers using very high quality files, it sure can help!

If network speed is your top priority, 5GHz is a better choice than 2.4Ghz.

If wireless range is your top priority, 2.4GHz is usually a better choice than 5GHz.

If your local area has a lot of existing Wi-Fi devices causing interference on the 2.4GHz band, using 5GHz is a good solution.

Hope that clears some things up. Tell us what you use in the comments, or if you have more specific questions, hit us up!